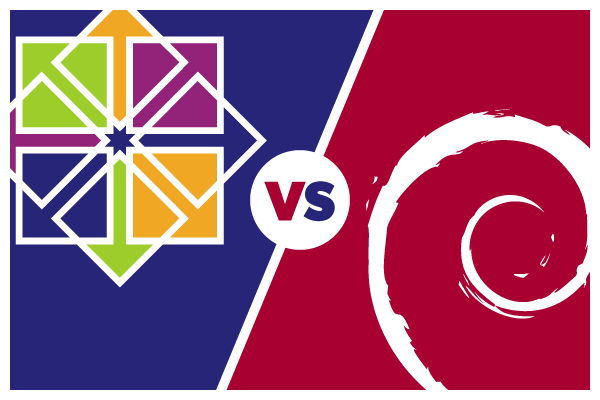 Choosing the right Linux distribution can be a big decision for any organization. For organizations considering CentOS vs. Debian, understanding the key differences between the two is key.

In this blog, we compare CentOS vs. Debian, including comparisons on architecture, package management, upgrading, support, and more.

CentOS and Debian are Linux distributions that spawn from opposite ends of the candle.

As with many Linux distributions, CentOS and Debian are generally more alike than different; it isn’t until we dig a little deeper that we find where they branch.

Get the Decision Maker's Guide to Enterprise Linux

The available supported architectures can be the determining factor as to whether a distro is a viable option or not. Debian and CentOS are both very popular for x86_64/AMD64, but what other archs are supported by each?

CentOS 7 additionally supports POWER9 while Debian and CentOS 8 do not. CentOS 7 focuses on the x86_64/AMD64 architecture with the other archs released through the AltArch SIG (Alternate Architecture Special Interest Group) with CentOS 8 supporting x86_64/AMD64, AArch64 and ppc64le equally.

Debian supports MIPSel, MIPS64el and s390x while CentOS does not. Much like CentOS 8, Debian does not favor one arch over another —all supported architectures are supported equally.

Most Linux distributions have some form of package manager nowadays, with some more complex and feature-rich than others.

CentOS uses the RPM package format and YUM/DNF as the package manager.

Debian uses the DEB package format and dpkg/APT as the package manager.

Both offer full-feature package management with network-based repository support, dependency checking and resolution, etc.. If you’re familiar with one but not the other, you may have a little trouble switching over, but they're not overwhelmingly different. They both have similar features, just available through a different interface.

Is the default filesystem a consideration for you? If so, XFS fans can rejoice that it is the CentOS default. Those who are more of the EXT4 persuasion may prefer Debian. Both XFS and EXT4 are popular and well-supported options for CentOS and Debian, so the default filesystem is likely not a determining factor. Besides, both distros support numerous other filesystems, such as ext2/3, NFSv3/4, btrfs, SMB, GFS2 and many more. (Note: btrfs is supported by CentOS 7 only.)

CentOS does not officially support some of the filesystems that Debian offers. Most notably is ZFS. Debian provides ZFS support through a DKMS contribution, but ZFS is not supported on CentOS at all (although ZFS support is available through 3rd parties).

Need the latest/greatest Linux kernel in your environment to support the newest hardware or kernel features? In that case, you may find Debian’s 4.19 kernel appealing.

Both Debian and Red Hat backport security fixes from newer kernels to their current kernels, though, so falling behind with regards to security isn’t usually a concern.

Debian’s ability to upgrade from one stable release to another, such as from Debian 9 Stretch (stable) to Debian 10 Buster (stable), can help keep a system up to date after many years. Debian typically releases a new major version on a 2-year release cycle with 3 years of full support and an additional 2 years of LTS (Long Term Support) for a 5-year lifespan, so being able to upgrade to the next stable major release is handy.

CentOS is largely community supported, but Red Hat does accept bug reports submitted by end users for CentOS and the upstream RHEL release. CentOS commercial support is not provided directly from the CentOS Project (or Red Hat), but is available through 3rd parties, such as OpenLogic.

Debian is primarily community supported, including offering a bug tracker. Debian does offer a list of consultants that can be hired to help resolve issues, but those consultants operate independently.

Some downstream distributions based on Debian have commercial support options, with Ubuntu probably being the most prolific.

In the end, choosing the distribution that is best for you comes down to technical requirements, internal resources, support options and business decisions.

If you must run on a RHEL-compatible distribution for application reasons, CentOS is the winner. If your engineering team’s experience is with distributions that use DEB packages, Debian would be a wise choice.

If you can support your systems entirely via your internal talent pool, both CentOS and Debian could be options. But, if you’d like to shore up your options and have commercial support available, maybe the commercial CentOS support options would sway you.

Get Support and Guidance for Your Enterprise Linux Journey

Whether you're deciding between Debian and CentOS, or Ubuntu and Fedora, our Enterprise Architects can help you chart a successful course forward. Talk to an expert today to learn more about how we can help your organization achieve its goals.