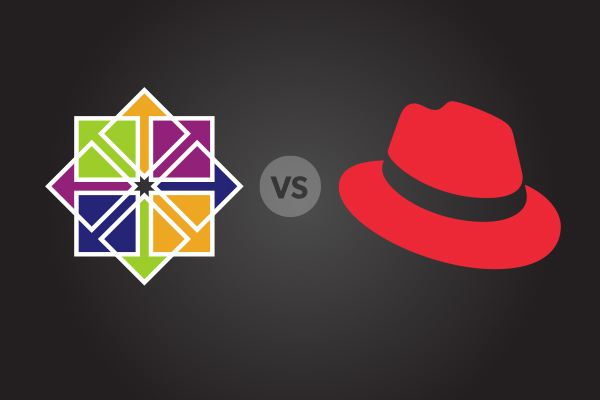 CentOS vs. Red Hat Enterprise Linux (RHEL): Do the Differences Justify the Cost?

CentOS and Red Hat Enterprise Linux (RHEL)have the same functionality. The biggest difference is that CentOS Linux is a community-developed, free alternative to RHEL.

If you're considering moving from RHEL to another Linux distribution, CentOS is the best choice for mission-critical enterprises.

Use this comparison chart to see how CentOS and RHEL stack up on over 15 different factors, including licensing, security, package management, and available commercial support.

CentOS is free, no matter how many systems you install or how many cores those systems have.

Since CentOS is built from the same source code as RHEL:

The lifecycle of CentOS matches that of RHEL, also.

For example, with CentOS 8 and RHEL 8, this means:

So, both RHEL 8 and CentOS 8 will receive the same updates until May 2029!

With many of the core folks who are responsible for CentOS are Red Hat employees, the developers are even the same. This isn’t to say that there aren’t any non-Red Hat employees working on CentOS, though. The CentOS community is vast!

CentOS remains locked to the upstream RHEL source as far as bug fixes, too. If you open a CentOS ticket reporting an issue, unless it is particular to CentOS (which very few issues are), you’re likely to receive a response along the lines of, “Please open a RHEL ticket at bugzilla.redhat.com. If/when they resolve the issue, we will inherit the fix from them.”

Branding is the major difference between RHEL and CentOS. Much of the work done for a CentOS release is removing the Red Hat licensing, branding, and URLs from the source code and replacing them with the CentOS equivalents.

Both RHEL and CentOS licensing is primarily GNU GPL with some other FOSS licenses. But RHEL adds paid, commercial licensing for the end-user.

One of the benefits of some of RHEL’s commercial licensing options is support. All RHEL installations can be “self-supported”, which means the system administrator has access to software updates and web-based content (articles, knowledgebase, etc), but no direct support from Red Hat.

Add-ons are a big thing with RHEL. Many of the RHEL add-ons are the same open source solutions that you can deploy on CentOS but are bundled with support and may include some RHEL-customized or proprietary configurations and utilities.  Things like centralized system management, high availability, and clustered file systems are offered in this manner.

CentOS has no paid support options available directly via the CentOS maintainers, and the price happily reflects that.

CentOS, like many open source projects, is community supported, bringing the knowledge and experience of 1,000s of die-hard CentOS (and RHEL) users together for the greater good. Some of the downsides of community support is that you don’t have anyone to contact and there are no guaranteed response time or SLAs.

But CentOS support is available from companies likes OpenLogic. Not only are these commercial support options usually at a much lower rate than Red Hat charges, but they can also be bundled with support for other OSS packages running on your systems. This gives you a single point of contact for all of your OSS software support requirements.

Without that direct revenue stream from the subscription model, CentOS does not endeavor to obtain the same level of hardware and security compliance certification as RHEL. As we’ve discussed, CentOS and RHEL are almost identical. So, CentOS should also meet all of the same requirements if configured the same way. But, without the expense of the actual testing, CentOS doesn’t share the actual certifications.

There’s also the matter of third party software vendor support. Many commercial vendors will specify that they support their software running on RHEL, but many don’t mention CentOS. This just means it is not a supported configuration according to that particular vendor.

If this is the case with any of your commercial software, check with your vendor and see if they’ll support their software equally on both CentOS and RHEL.

CentOS doesn’t come in “flavors” as RHEL does.

Red Hat offers variations of desktop, workstation, developer, and server installations, as well as virtual host/guest options. The included software, add-ons, and typical support level are different for each one.

CentOS offers LiveCD ISOs which is something that RHEL does not do, even though their mutual ancestor, Fedora, does. LiveCDs are bootable CDs/DVDs and are great for rescuing a misconfigured/damaged system or for testing things out without the need to install the OS onto a hard disk.

Speaking of repositories, there is a repo difference that some consider important. RHEL publishes metadata about packages that describe the security issue or bug report addressed by the updates. This can be useful if you wish to only apply security-related updates or to limit the updates installed to only those that address a particular open source vulnerability.

With RHEL, it is possible to test out release candidates a few months before the full GA (General Availability) release. While running your production systems on a beta release is not a good practice, early testing of your applications on the release candidate in a lab environment can alert you to possible issues sooner.

CentOS does not make beta releases available but does offer a CR (continuous release) repository that is populated with the packages that will make up the next point release. The CR repo is available for a couple of weeks before the GA release.

The CentOS 7 releases were publicly available about 2–4 weeks after the equivalent RHEL release. Ongoing package updates were released very shortly after the RHEL updates. Security updates usually only seeing about a 1-day delay.

CentOS vs. RHEL: How to Get Enterprise Linux at a FAIR Price

Many enterprises leverage Red Hat Enterprise Linux (RHEL). But there's a better way to use Linux in the enterprise — without the costs and complications of RHEL. Get our recent white paper to find out how you can get enterprise Linux at a fair price.

📘 Get the White Paper

Each company has different requirements around their operating system and the type and level of support they need — and so does every customer.

Something else to take into account is your in-house talent pool. Do you have a room full of enterprise Linux / open source gurus, each with 20+ years of experience?  The size of the room may vary based on the size of your business, but the duration, and therefore the cost, of your outages is likely going to be directly proportional to the average years of experience of those in that room. I’m not just talking about monetary impact, either.

Outages can have hidden costs, too: your reputation could be damaged, you could lose future business, a loss of in-house confidence can make progress grind to a halt.

You need to weigh all of the things that we’ve discussed to determine how much you need to invest in your OS infrastructure.

If you can self-support, CentOS may makes more sense than paying Red Hat to let you do that same self-support.  If you’re mostly self-sufficient but need some support “insurance”, or you want to outsource the bulk of your CentOS support, a support contract with OpenLogic may be the best option.

If you’re locked into using RHEL by a 3rd party software vendor or have other business need that make RHEL the only viable option, Red Hat will be happy to take your money. OpenLogic support contracts typically save our customers over 50% when compared to RHEL support subscriptions.

Migrating from RHEL to CentOS can deliver many cost-savings. Watch the video below to learn more:

Consider CentOS For the Enterprise

Choosing CentOS, or other free enterprise open source Linux distributions, can be a smart choice for some businesses. CentOS offers all of the same features as RHEL, but for free. And you can get enterprise-grade support at a much lower cost than you'd be paying for a RHEL package.

Talk to a CentOS expert today to learn how we can help you migrate from RHEL to CentOS.