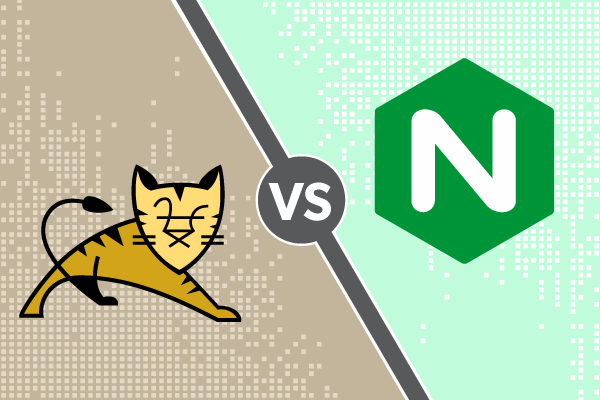 The main difference between Apache Tomcat vs. NGINX is that Tomcat is an application server and NGINX is a web server. Both are open source, web infrastructure technologies and they can be used together or independently, depending on your use case.

In this blog, our expert looks at Tomcat vs. NGINX, highlighting the similarities and differences between the two to help you decide which to deploy, or whether it makes sense to implement both.

Tomcat is capable of many great things, but in the wrong hands, it can wreak a lot of havoc. It is for this reason that we often safeguard Tomcat by proxying a server in front of it. This allows Tomcat to stay in the back, away from the war zone of the open internet.

A logical choice is to use Apache’s own HTTPd server, but more and more people are adopting the faster, beefier NGINX web server for their needs. As far as performance goes, NGINX is known for being able to process information faster than Apache’s own HTTPd. If the workload of your web server is rather intensive, NGINX might be a better choice.

Apache Tomcat is a lightweight, open source Java application server that serves as a reference implementation of the Servlet specification.

NGINX is a web server that was developed in 2004 as a direct competitor to Apache HTTPd. It can also serve as a load balancer, reverse proxy, and http cache.

The non-blocking, event-driven architecture of NGINX makes it both fast and scalable, and it is frequently deployed in Kubernetes stacks.

In this section, let's take a look at some of the different ways Tomcat and NGINX handle content and client requests, as well as how they stack up in terms of configurability, stability, and support.

When it comes to static content, NGINX simply serves content faster than Apache’s own HTTPd. It is estimated that NGINX can handle nearly four times the traffic that HTTPd can handle. This comes with less flexibility than what HTTPd offers, but if performance is what you care most about, NGINX might be the best option for you.

NGINX can also serve up dynamic content using FastCGI, SCGI handlers using scripts, WSGI application servers, and Phusion Passenger modules. CGI stands for common gateway interface protocol. These applications run in separate processes that are created at the start of each request and killed at the end. However, CGI has its own limitations, so FastCGI was developed and the way it works is that each FastCGI process handles multiple requests over the lifetime of the process. This allows FastCGI to avoid overhead of per-request process creation and termination. SCGI is short for simple common gateway interface, and requests consist of a concatenation of netstring-encoded headers and a body.

Tomcat is also capable of serving both types of content, but as noted previously, having direct access to the Tomcat server is a security hazard.

When using NGINX with Tomcat, the most common way to handle client requests is to proxy from NGINX to Tomcat. You could have multiple applications running on several Tomcat servers on the backend and just keep NGINX out in front. This layer of protection ensures that your applications are not tampered with and remain stable and out of reach of malicious users. It also provides an additional layer of management to shape traffic coming into and out of your environment.

Both Tomcat and NGINX are considered extremely stable products by today’s standards and both have mature releases that can be used in a production environment. Tomcat has several active branches at this time that average about 10 years in lifecycle. NGINX has provided a mainline branch, a stable branch, and offers several legacy versions as well.

Both Tomcat and NGINX provide a high level of flexibility and performance tuning. Both products have documentation on the subject of performance tuning, and both have active communities one can reach out to with questions, comments, and concerns. Tomcat still uses a traditional mailing list while NGINX has opted for a blog and Twitter account.

Tomcat vs. NGINX: Use Cases

Tomcat is often used to serve up Java-based web applications. If you have an application that you want to be accessible to people on the web, Tomcat is the tool to bring that application to the masses. This could be a message board on PHP, a web browser game, or an internal wiki page for your organization.

NGINX would then be the web server that will host the website, direct traffic, manage communications to the application, and more. In this scenario, it acts more as a facilitator, but on its own can be used just to serve web content without any Tomcat interaction. NGINX would be the tool you would use to host your own website using HTML. It could also be the proxy server to your backend.

As explained, Tomcat and NGINX can work together quite effectively, if NGINX is more suited to your proxy server needs than Apache's HTTPd server. NGINX can also operate without Tomcat to host and serve web content on its own. If your Java application handles sensitive data, it would be wise to run Tomcat behind the scenes and let NGINX or Apache's HTTPd server manage incoming traffic to keep your environment secure.

Learn more about how OpenLogic can support your Tomcat deployments today by visiting our solutions page or downloading our datasheet below.