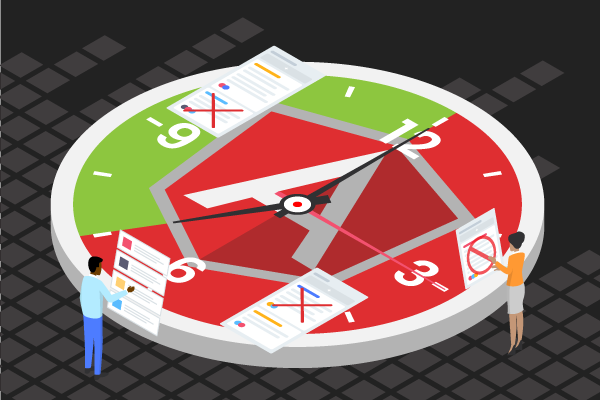 AngularJS EOL is nearly here. And, for those using this popular open source web framework, it will have a profound impact on their development and support plans.

In this blog, we look at the current Angular community support roadmap, discuss AngularJS EOL, detail the difficulties of potential migration paths, and support options for those not ready to move to an alternate framework.

Back in January of 2018, Pete Bacon Darwin, a Core Angular team member, announced that AngularJS would have one more significant release in July of 2018, then enter a three-year long term support period. This would have effectively made AngularJS EOL July of 2021.

Then, in July 2020, AngularJS gave an extension to that LTS – lengthening it by six months to give companies impacted by COVID-19 a longer runway to migrate.

This discontinuation of AngularJS came as a response to the growing popularity of Angular (a Typescript-based rewrite of AngularJS) which Darwin said had grown “five times faster than AngularJS did since its original release.”

Will There Be Another LTS Extension?

For those hoping for another extension for AngularJS LTS, it doesn’t appear to be in the cards. The community is no longer accepting change requests or making attempts to update the application beyond bugs/issues within set parameters – and that’s only until end of life.

When Is AngularJS End of Life?

AngularJS end of life begins December 31, 2021 – and marks the end of a three and a half year long term support phase.

If your application is still on Angular 1.x you have the following basic choices in the coming months:

To put it into context for technical management at companies considering these options, rewriting applications and building new tests to meet enterprise requirements may cost hundreds of thousands of dollars for each application you refactor.

Changing something as core to an application as its framework will always be an immensely challenging task. From infrastructure, to application code, to testing, to deployment. Each piece must be carefully verified to ensure no regressions in behavior, performance, or stability. To make matters worse, in many cases fundamental differences in frameworks can force restructuring or redesigning pieces of the application.

Rewriting to an Alternate JavaScript-Based Framework

The good news for AngularJS users is that there are comparable, mature JavaScript frameworks available, including ReactJS and Vue. But, as noted above, migrating to these frameworks isn’t cut and dry.

ReactJS is a JavaScript-based framework (or library, depending on who you ask) that focuses on providing an easier, more programmatic approach to rendering content.

ReactJS is arguably more limited in scope, and will need to be extended with libraries to replace many of the functionalities found in AngularJS.

ReactJS is a great choice, but its limited focus means you may only be replacing one piece of the larger framework you're losing.

Similar to ReactJS, Vue has a more limited scope than AngularJS and does not enforce the strict application structure defined by AngularJS. It also discourages two-way data binding, which can be problematic for applications making heavy use of this feature.

On the plus side, Vue was heavily inspired by AngularJS which can make a migration less complicated.

Vue offers a strong ecosystem of tools while still staying within JavaScript. While there are some incompatibilities with AngularJS, depending on your usage, Vue may be the right choice to keeping modern without leaving Javascript.

Angular, a TypeScript-based re-write of AngularJS, offers the clearest upgrade path from AngularJS – but at the cost of learning TypeScript and slowly porting your application over.

While Angular provides a migration tool (ngUpgrade), and it can help bring over applicable code, Angular and AngularJS have their own ideas about how an application should be structured. Depending on the architecture of your AngularJS application, you may find the transition to be more challenging than expected.

The Consequences of Unsupported EOL AngularJS

What happens if you want to keep your application on an old framework for a period of time and it will no longer be supported by the community? Well, when you consider community support ending, that means no more security patches, no more features, no backported functionality, and so on. When you hit that inflection point, if you chose to stay on a framework like AngularJS, you could try to just absorb the risks as things are not updated.

This means that browser interoperability may cease, systems may be vulnerable to security risks or other complementary components like new versions of jQuery may cease to work as intended. This means your app may have some serious issues as it ages along with this EOL framework.

Even with the long runway, many teams haven’t had the time or resources necessary to migrate from AngularJS. The priority for these teams, if they can’t migrate to a supported framework, will be keeping their AngularJS deployments patched against known CVEs.

For all but the biggest companies, creating and administering these patches won’t be an option. That leaves commercial extended long term support as the only real viable solution for most companies.

Luckily, there are a few commercial support options available – including OpenLogic.

Get AngularJS LTS Through 2023

If you need a longer runway for your AngularJS migration, OpenLogic is here to help. Learn more about our AngularJS LTS via the link below.

For organizations using AngularJS, migrating to an alternative framework (whether that’s Angular, or a JavaScript alternative) is a necessity. For teams who need more time to complete that migration, finding an alternative means of long term support before community end of life is imperative.

The good news is that there are great alternative frameworks (JavaScript-based or otherwise) available, with a range of benefits and features that can accommodate countless use cases.