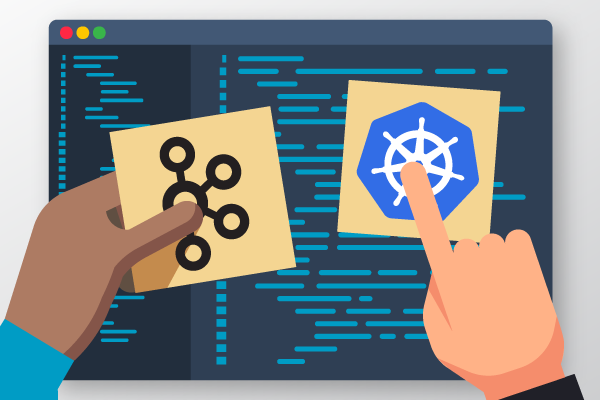 Deploying Kafka on Kubernetes With Strimzi

Kafka on Kubernetes is a powerful combination deployed by more and more enterprise IT teams as cloud-native development and microservices have become increasingly popular. When combined with Strimzi, managing and running Kafka Clusters on Kubernetes is easy — whether that's on-prem, or across public, private, or hybrid clouds.

In this blog, we will explain why it makes sense to install Apache Kafka on top of Kubernetes, what Strimzi does, and how to quickly spin up a cluster in a Minikube environment.

Why Run Kafka on Kubernetes?

The rise of Apache Kafka as a stream processing platform has coincided with the movement toward event-driven architectures (EDAs) and containerization, and running Kafka on a container orchestration system like Kubernetes allows it to be deployed in the most native way possible. Kafka’s architecture in Kubernetes works particularly well, and for organizations that are already using Kubernetes for container-based applications, Kafka (with Strimzi) simplifies many operations at scale.

Before diving into deployment, let's briefly review the main components of Kafka. In Kafka, records are stored in topics, and topics get divided into partitions. Kafka partitions create multiple logs from a single topic log and spread them across one or more brokers to handle message delivery.

To coordinate the flow of data between consumers, producers, and brokers, Kafka leverages ZooKeeper. Kafka and ZooKeeper work together to form a Kafka cluster, with ZooKeeper providing distributed clustering services, storing all kinds of data configurations, and coordinating the cluster itself, both brokers and consumers.

Here’s a diagram showing how these components are integrated:

Strimzi is a CNCF-incubated project that simplifies the process of installing and running Kafka on Kubernetes. Strimzi provides different operators that allow you to deploy and manage Kafka clusters on Kubernetes in a declarative way. The operators speak with custom resources and YAML, allowing a Kubernetes application to be packaged, deployed, and managed.

How Does Strimzi Work?

Strimzi extends the functionality of Kubernetes through its operators, simplifying any process where manual intervention was previously required. Strimzi also enables the management of components such as Kafka Connect, MirrorMaker, or users and topics, extending its declarative capabilities.

As previously mentioned, Strimzi makes use of custom resources, which are created as API instances that are added by Custom Resource Definitions (CRDs) to Kubernetes. This makes it possible to create any CRD and objects within a cluster, and when used, it is available as if it were a native Kubernetes object.

Creating a Kafka Cluster on Kubernetes With Strimzi

The most common method to install a Kafka cluster with Strimzi is the following: 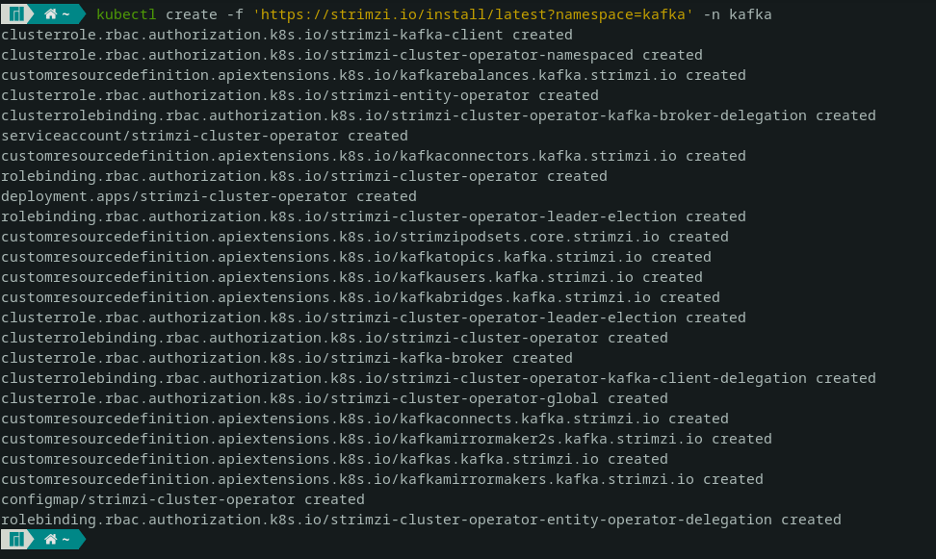 Now we have created a Kafka cluster that in turn deployed an operator pod. Let's visualize it:

And this pod, in turn, extends the capabilities of Kubernetes through CRDs with new Kafka objects.

In order to create a Kafka cluster, we need to create a Strizmi Kafka Resource. To do this, we are going to describe a yaml file named kafka.yaml: 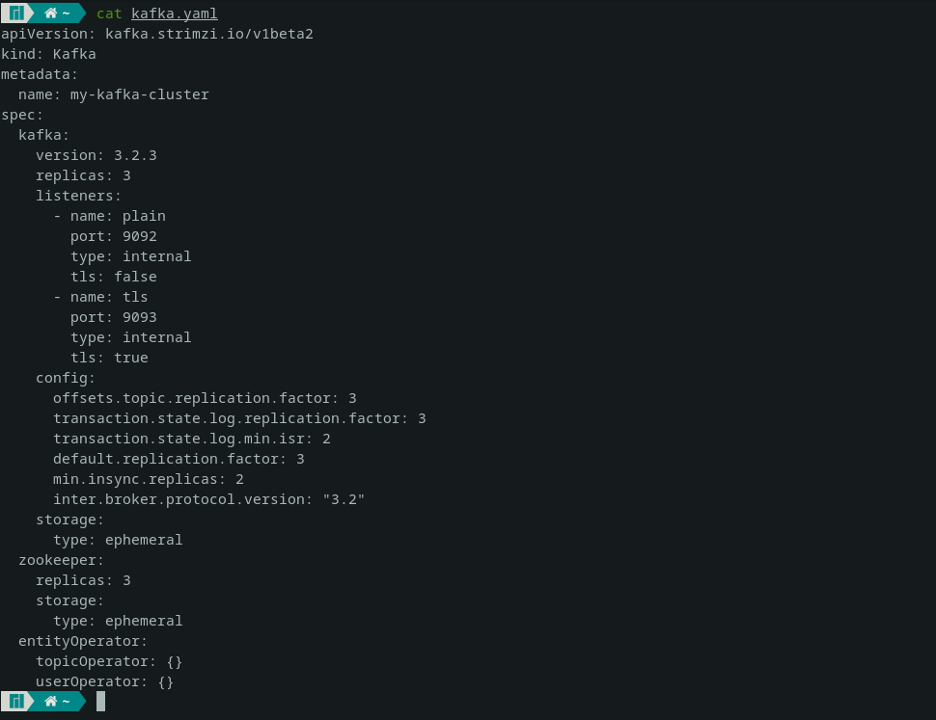 In this example, the storage type is ephemeral, so that the duration of the data is linked to the lifetime of the Kafka broker Pod through the emptyDir volume. This includes 3 replicas of Kafka brokers and 3 of Zookeeper.

To create the cluster, simply apply the kafka.yaml configuration: 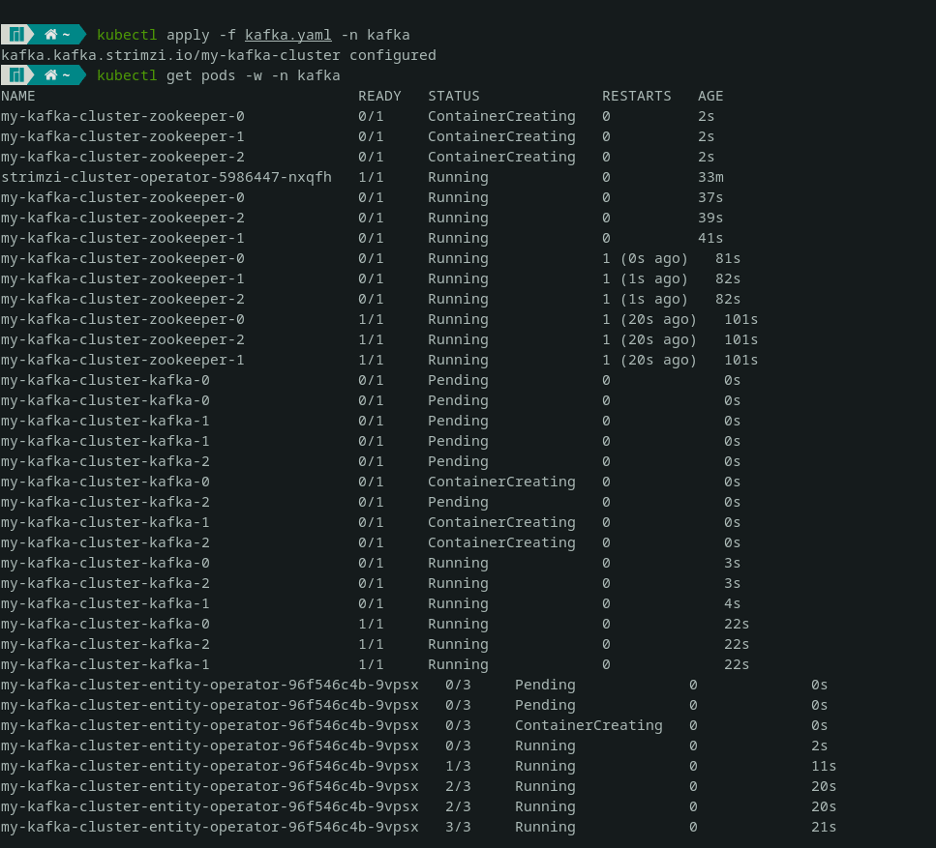 Now we are ready to produce and consume messages:

On another terminal, we can execute the default consumer inside the pod to get the messages:

So now we have successfully installed the Strimzi operator, deployed a first resource for a Kafka cluster, and tested it by producing and consuming some messages.

80% of the Fortune 100 rely on Apache Kafka and for good reason — it is exceptionally durable and can handle massive amounts of streaming data. On Kubernetes, Kafka truly shines; DevOps teams can easily scale and manage all their Kafka instances in a single environment. Strimzi is particularly useful when running Kafka on Kubernetes because its operators automate much of the work that would otherwise have to be done at the infrastructure level.

We outlined one deployment configuration for Kafka with Strimzi on Kubernetes in a Minikube development environment above; stay tuned for future posts where we’ll look at some other exciting use cases involving these technologies.

Unsure About Your Kafka Deployments? 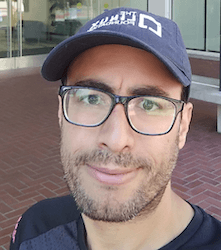 Omar is a Senior Sales Engineer at OpenLogic who has been involved in the open source movement for more than 20 years. He is particularly interested in cloud infrastructure solutions at scale with a special focus on projects like OpenStack and Kubernetes.

A movie buff at heart, Omar makes documentaries and film podcasts in his spare time, conducting data analysis with open source tools to understand the behavior of audiences.